In LOCKDOWN? Build your own Flight Simulator


Are you unable to fly, due to lockdown, or shutdown of your airport, this may be the right time to start on flight simulation. Build your own home cockpit - anyone can do it.

Let's face it: Flight simulation is no easy matter. But, as with most complicated things, to get there, take one step at a time!

The first devices that could be called simulators were just cockpit mockups sitting on the ground that could move around their axes when the pilot rocked his controls. These developed over time into somewhat sophisticated 'link trainers'.
From WWII on, flight simulators became more realistic by making a set of camera's move over a detailed model of an airfield. This would suffice as the most important skill in flying was to take off and land the plane. The simulator itself was made up of a complicated combination of electronics and hydraulics to suggest the movement of a real aircraft and produce a consistent view.
An overview of this development is shown at historyofsimulation.com. For instance, this is how it all worked with the VC-10.

When the computer took over, a new revolution started. The world could now be shown in detail and the flight dynamics could be controlled easily by a mathematic model. The calculating power of the computer helped to model the flight more closely and allowed training of unusual attitudes and emergencies.
The introduction of the PC in the eighties caused a fast development of home simulator software. Nowadays a lot of simulators for professional use are based on this same development. Programs that were considered games only 20 years ago have become the mainstream of flight simulation software.
By conseqence the average citizen can find himself in the seat of a simulated airliner by getting the right software and a set of controls connected to his PC.

That is what we did back in 1985, starting with Bruce Artwick's Flight Simulator 2.1 on a 4.77 MHz(!) 256K RAM machine, quickly followed by subsequent versions of FS taken over by MS. It was rather archaic, running in 320 x 480 BW or 4-color (magenta-cyan-black-white). Great fun was also the simple but beautiful Chuck Yeager flight simulator, aiming at 100k feet in the supersonic X-15 or doing a 20 degrees steep Space Shuttle approach.
So much for history. Here you can look up the wole range of simulators. Now we have lightning fast supercomputers with Gigs of RAM and near-realism graphics. You don't need a top-of-the-bill machine. The average home computer will do (provided that you can run games on it; some laptops may be off purpose).

The first thing is to consider what software package to use. There is a lot of products on the market, designed with diffferent goals in mind.
The easy way is to go for Microsoft FSX 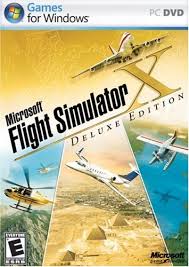 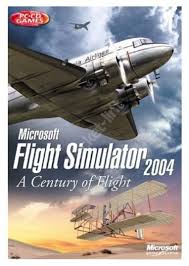 FSX needs a modern machine whereas FS2004 will run on an older model. This would be by no means below standard; look at the FS2004 view of San Diego further below. Microsoft's latest edition, the Steam Edition (based upon FSX) may also do for you. Or you may be inclined to run the Combat Simulator. And we are awaiting a new MS sim which may be released this year.

Many prefer to replace their FSX by Prepar3D, a spin-off from MSFS, built by Lockheed for professional purposes. Whatever you can lay hands on - if you want Lockheed's, just get a developer license for a start.
There's also X-Plane, holding a small part of the market. One of their aims was to better the dynamic modeling inside MS software, which seemed to lose a bit of quality over time. If you insist on Linux, X-Plane will run on it, or just get Flight Gear, a simulator with a scientifical approach.

You do not need to build a real cockpit rightaway. Your desk will do. Get a nice screen and put it away from you as far as it is wide. Put a confortable office chair behind it. A complete flightdeck is possible but may be far away yet. You could even attach a Flight Instructor Station (addon software). See below both options. 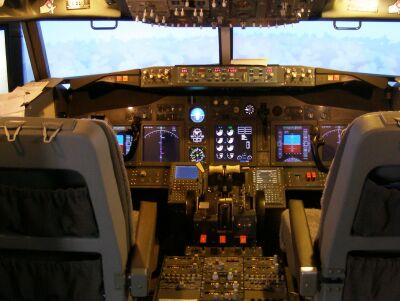 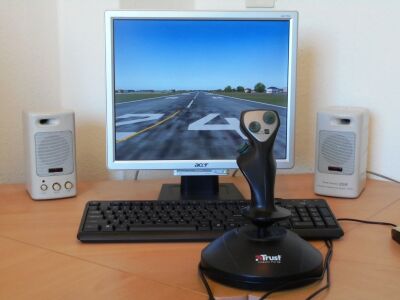 What input controls are you going to use: Yoke, stick, throttle stuff. A number of manufacturerers have them ready for you, like Aerosoft, Saitek, CHProducts, Acc Air.Craft.Controls. If you want to try a gaming stick you have, that is OK. Most hardware connects easily to these simulators.
Maybe you want to add a set of rudder pedals to make steering on the ground more realistic and allow crosswind landings.

The older sims run fine on old systems having Windows XP. Vista is a no go for many. To have them run on Windows 7, 8 or 10, you will have to set the program's compatibility to XP SP3, and run them as Administrator.
FS2004 will have a problem running on Windows 10, unless you apply the no-CD patch. Security measures in Win10 prevent you from loading anything from a CD which is a requirement (by MS itself!). FSX requires activation by Microsoft.

Be sure to download and install the most recent service packs/fixes for your software. The FS2004 patch you can find here.
The FSX service pack is at Flightsim.com Must have files. Besides this, you will find there a lot of interesting upgrades & addons.

Before you can fly comfortably around, you have to familiarize yourself with the simulator software. You will have to adjust some settings to enable the use of external hardware controls. Depending on the speed of your machine, you may want to select less details in the scenery display, or fix the framerate (how many screen updates you get per second). If the system is too slow for the purpose, reduce settings to prevent the flight to become jerky.
Pay some attention to the calibration of your flight controls. This can be done in Windows or from the simulator software. Many flight models are too sensitive to control input, so it is wise to reduce the sensitivity by moving around less while calibrating the axes.
Another adjustment you can make is realism. That way the aircraft may be more forgiving when you make mistakes. When you are new to this, set it to 'easy'. The real-life pilots will want a better response and set to 'realistic'.

You might take some time to get acquainted with the various key combinations for often used purposes, like changing views, moving the plane without flying, frequently used switches like landing gear, flaps and engine settings. For you don't have yet a real switch in place for everything you need. There may be a short key reference card in the documentation of your sim. Note down your favourite ones.
After this, fly a bit around with the default situation and the default aircraft. Soon you will choose your favourite airport to depart from, and your own plane.
Also time of day, where you start in the world, and what kind of weather you want is to be selected. Weather can be set to real, in that your sim weather will be synchronized with what is reported at the moment at that specific place. Parameters are saved in the scenario you create for yourself.
Most sims allow you to take video's of your flight, Replay with evaluation graphs to analyse your performance. 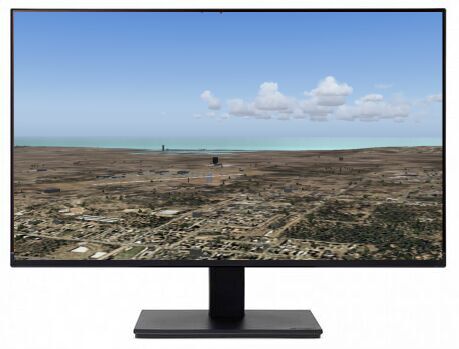 The next step could be: Enhancing your sim, making it more realistic

To get more fun out of your simulator, you can run add-ons next to them that cover a range of purposes that you may need in trying to get it more real.
A few examples: A lot of fancy aircraft (your type will be amongst them), sound packs, scenery and details, virtual airline software, a/c with built-in FMS systems, communication and other.
Add-ons are available at the file libraries of the great simulation platforms: http://flightsim.com, http://avsim.com, http://simflight.com.
Many of them are connected to the sim using FSUIPC, an in-memory interface built for the purpose, or they use Microsoft's Simconnect. For FSUIPC we direct you to the Official Pete (& John) Dowson page. Version required depends on your sim.

Virtual pilots are not flying alone either. Joining a platform for multiplayer may help you find friends to fly with. Connect to an open session or just to one other person and meet each other in the sky. This works in a similar way as online gaming does. Watch each other's plane fly along in formation. Have a good time, flying an overland trip together, or practice approaches and comment on it or even give lessons. If you are a flight instructor, you could consider teaching online for some time, or in addition to the real thing.

Checkout multiplayer servers like FSOpen or RealFSX.
Find more providers here. And find out all about the procedure.

You may go further than that, and join one of the world wide communities flying under realistic Air Traffic Control. It is possible to fly regular schemes, build flight time and even graduate to virtual airliner captain. Or quit flying altogether, and become an ATC controller yourself!
Join one of these: IVAO, the International Virtual Aviation Organisation, or VATSIM, the Virtual Air Traffic Simulation network.

While building a complete cockpit may be a remote consideration, it is possible to take a step towards it by making your simulator basically function more like a real cockpit.
The instruments in the sim are shown on the same screen as your outside view. Outside view and panel are competing for space, and for your attention. But you can do better than that.
Your simulator experience will be more natural if you run a high quality graphics instrument panel on another PC, attached to your home network. FsXPand (server on your FS PC) and FsClient (client) were made for that purpose.

It is also possible to run FsXPand and FsClient on the simulator PC itself (if the machine is a heavy one). Your graphics card may have a second output to extend your desktop with, or allow an extra card. Used flatscreens have become cheap enough these days to afford a couple more. 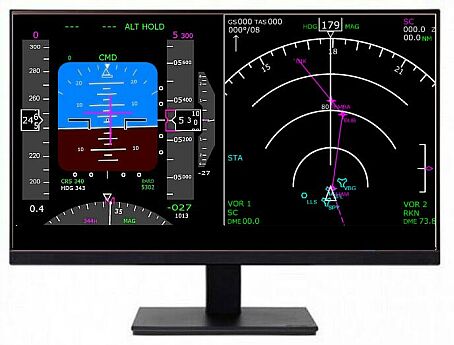 Simulator software offer a great number of key commands to be sent to control the simulator. The best way to make use of them is attaching a USB card sending keystrokes from buttons. This way you can build a realistic Main Instrument Panel with all the switches and knobs required. For instance, use the Leo Bodnar BU0836 or you may check out the Opencockpits USB Axes PLUS card.

If you connect this hardware to the FsClient PC, commands can be sent to the sim from there. Also specific FsClient commands can be set up, for instance to select the modes and ranges of the 737 Navigational Display, and a range of CDU, EFIS and MCP commands for use with FsXPand FMS version if you want to build a DIY kit.
FsXpand offers also some nice side features to enhance your flight experience. The sound option includes stereo touchdown effects and a deep ground rumbling telling you the plane is rolling. Putting a bass speaker under your chair, you will be amazed by the realism it adds.

You can track your flight online by FsXPand Tracker function. Or fly with your copilot being somewhere else, his panel shown by a client running over Internet, and having an outside view in the 3D tracking facility.

Or practice difficult approaches online. Your plane will be placed at the approach from your smartphone.

Want to share the progress of your project? Our forum is the place to do it!.